What is a Waterbed? Its History & Composition in a Nutshell

Give this read some star power!
[Average: 5]

We hope you love the product we recommend! Just so you know, at no extra cost to you, we may get a small commission for purchases made through links in this post. Your support is appreciated. Enjoy the read!

Unless you’re born in the 2000s, I think most people can answer the question “what is a waterbed?”

Maybe your parents bought you one when you were a child and all you remember is waking up to soft, beach-like waves every morning.

Perhaps you were one of those hippies who bought one 25 years ago and can’t imagine living without it now.

Or you were one of those diehard fans that commissioned a waterbed with an impressive fish tank built into the headboard!

I remember those – they were mesmerizing. I often wondered how anyone would be able to fall asleep with such exotic marine life to look at.

For the younger generation that was (sadly) not exposed to this creation (or rotary phone, typewriters and floppy disks!), let me start at the beginning. 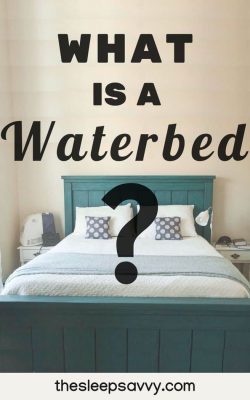 Who Invented the Waterbed?

In ancient times, over 3,600 years ago, the mighty Persians used to sleep on water-filled bags made from goatskin.

Fast forward to the 1800s. Floatation mattresses were used by doctors in hospitals to help patients.

These were people who couldn’t get out of bed and had to lie in the same position for days on end. It was very common for them to develop painful bedsores.

To prevent these nasty pressure ulcers from forming, these patients were prescribed waterbeds to rest on instead.

Because water gets displaced instead of compressed, it can almost perfectly conform to your body, giving you even support with no added pressure.

Who is this guy?!

Robert is an American Sci-Fi writer.

He’s known for his 1961 bestselling novel Stranger in a Strange Land, which was influential in shaping America to what she is today.

He came up with the idea of a waterbed while he was confined to bed rest from pulmonary tuberculosis after he was discharged from the Navy.

He described it in so much detail in his books that it prevented a later inventor from patenting the idea.

Who is this inventor?!

I’m so glad you ask!

Considered the father of the modern-day waterbed, this Miami Beach native revolutionized the bedding industry with his design of the waterbed.

This was considered the biggest change since coil springs back in the 1800s, and not much has changed since then either. 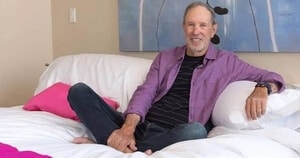 In 1968, he was a 20-something industrial design student at San Francisco State University doing his graduate thesis when he stumbled upon this discovery.

Charlie’s aim was to introduce human comfort to furniture pieces.

The first prototype was a chair filled with cornstarch in a vinyl bag. It doesn’t sound very appealing, I know.

But according to him, it was comfortable. Just too heavy, impractical and immobile at 300 pounds.

He then replaced the inner filling with jello for a more liquidy feel, but it was still heavy and stunk up the place when it started to decompose.

Learning from his failed experiments, he decided to switch gears and focused on another household item. 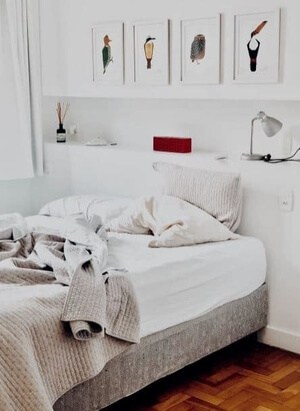 You spend the most amount of time sleeping on it. 1/3 of your life, in fact!

So it should be the most comfortable furniture you own, right?

Rumor has it that Charlie couldn’t afford to buy more jello, so he found the cheapest and most accessible resource to fill the vinyl plastic with that he could – water.

After his first night of testing, he quickly realized how important a warm bed was to relax your muscles and be able to sleep. So he put in some temperature control, which is still a favorite benefit of the waterbed today.

Charles showed his new invention to his class and they loved it.

He quickly applied for a patent after the raving reviews from his classmates.

Remember, Robert Heinlein and his detailed description of the waterbed in his novels? Well, that did prevent Charles from getting a patent.

Don’t worry, because he eventually was given a patent in 1971 for ‘liquid support for human bodies’.

Charlie went on to file many, many more patents that led him to invent products like an inflatable kayak, solar-powered outdoor shower, and waterproof carrying bags.

The Rise of The Waterbed Wave

The waterbed wasn’t an instant hit.

It took quite a while for the public and the mattress industry to be convinced that the waterbed was going to be the next big thing.

It started slow – a handful of sales to risk-taking early adopters before some celebrities got wind of the new trend. With some star power endorsements, it started to take off!

Well, people loved that it was allergen-free, temperature-controlled and the floating surface was great for back pain. Most of all, it was a novelty!

Of course, it didn’t hurt that it was viewed as a status symbol among the avant-garde and wealthy.

According to the Waterbed Manufacturers Association, at the height of its popularity roughly 20% of mattresses sold in America were waterbeds. It grew into a $2 billion industry.

According to The Washington Post, Hall received plenty of monetary awards for winning waterbed patent infringement cases. Good for him!

The Popping of The Waterbed

Alas, their popularity plummeted and the novelty wore off.

For one, they were high maintenance.

Installation required hundreds of gallons of water, and people were scared that the heavy weight of the bed would fall through their floor.

They were too heavy to move around and it somehow got associated with hippies and sex.

Surely not the best image to have.

Because of its exponential surge in popularity, there were a lot of bad quality knock-offs that were prone to leaks. These were made by people who were just trying to make some fast money.

By the early 90s, upgraded versions were on the market that didn’t require a hose, but that still didn’t help boost its reputation.

Landlords banned renters from bringing waterbeds into their rental properties – either completely or on a condition of having expensive, specialty insurance for potential water damage.

There were too many horror stories of waterbeds popping open for them to take a chance. Also, because of it’s massive weight, tenants would just leave the waterbeds behind when they move out.

By 2013, waterbeds made up less than 5% of mattress sales in America.

With new technology and innovation, there have been many iterations of the waterbed since its the first debut. You’ll be happy to know that many of the complaints have been addressed and fixed. 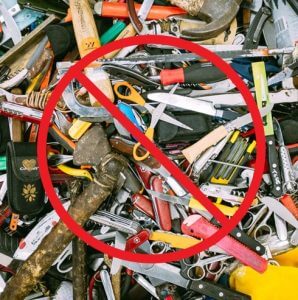 They’re made with better, quality material, so they don’t burst open easily.

When they do leak, it’s usually just the size of a pinhole, so you can easily patch it up yourself at home.

Just remember to keep the sharp objects away!

Are Waterbeds Making a Comeback?

50 years later, waterbeds might just be making a comeback!

It feels like only Baby Boomers and their Millennial children see waterbeds in a fun, nostalgic light. Perhaps, it time to introduce it to the newer generations too!

Introducing AFLOAT, made by – you guessed it – the one and only Father of Modern Day Waterbeds, Charles Hall!

Set out to revamp, upgrade, improve his original invention, AFLOAT is targeted at Millenials and is “[nothing like] your parents’ waterbed.”

Well, they’re using new technology that wasn’t available back then.

It’s not launched yet, but I’m already waiting with anticipation to try it and will report back!

What is a Waterbed Made Of?

That depends on the maker.

Each model is slightly different but here’s the basic concept.

Other materials could be used too, but these would be rare and I haven’t seen any so far.

Depending on the motion type – free flow, semi or waveless – there is foam and/or fiber inside the mattress.

The higher the percentage of waveless, the more layers of stuffing inside to restrict water movement.

These layers can span from just one to 12 or more!

They’re usually tethered to each corner to keep them in place so they won’t knot together when filling up or draining the waterbed.

On top of these layers, there may also be extra, shorter layers in the middle of the bed for better back support.

How are Waterbeds Made?

To satisfy your inner nerd’s curiosity, here’s how one company manufactures a softside waterbed.

I got to say, it’s pretty cool!

The vinyl plastic is conditioned and pre-shrunk, before they run it through machines that cut all sides of the waterbed to size.

Next, workers weld the mattress together, closing the corners round instead of pointed to make it last longer.

Because this is a semi-waveless waterbed, a layer of foam is placed inside before they weld the whole thing shut.

Finally, some quality control is carried out for good measure. They put the waterbed under a press and extract all the air out with a vacuum hose.

The mattress is set aside for 6 hours to make sure no air comes out.

If it does, then that indicates a leak, and they’ll patch it up.

How Long Do Waterbeds Last?

Waterbeds can last as long as or even longer than any traditional mattress.

Because they don’t have much construction inside, you don’t have to worry about the stuffing compressing, dipping, denting or sagging.

That’s the beauty of using water, or any liquid because all liquid compounds are fluid and displaces.

If you take good care of it and keep sharp objects away, it very well could last you 20+ years!

What are your takeaways from this article?

We learned quite a few things today, so here’s a quick summary:

That’s it for now, but don’t stop here – keep learning! Here’s more sleep information for you!

Excited to buy a waterbed now?

Good! Because all the hard work is already done for you.

>> Here’s our review on the 5 best waterbeds here: thesleepsavvy.com/best-waterbed-mattress/ << 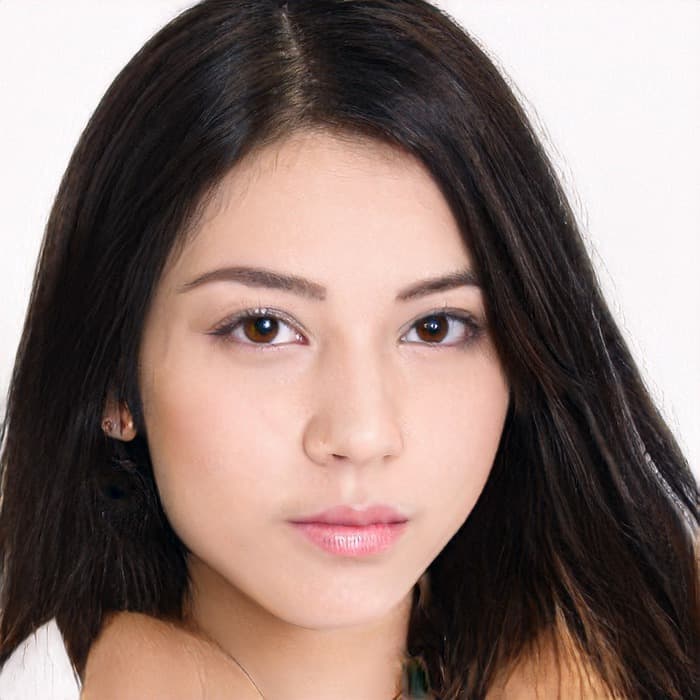 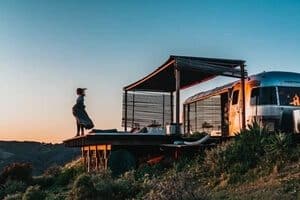 Sleeping in an RV: Where to Camp for FREE, How to Sleep 10 people & 7 Tips For Better RV ZZZs 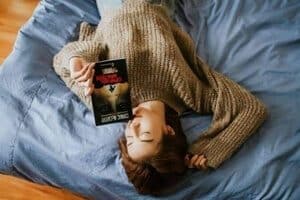 Best Futon Mattress for Sleeping in 2019: The Top 5 Reviewed & Compared with Buyer’s Guide

Scroll back to top